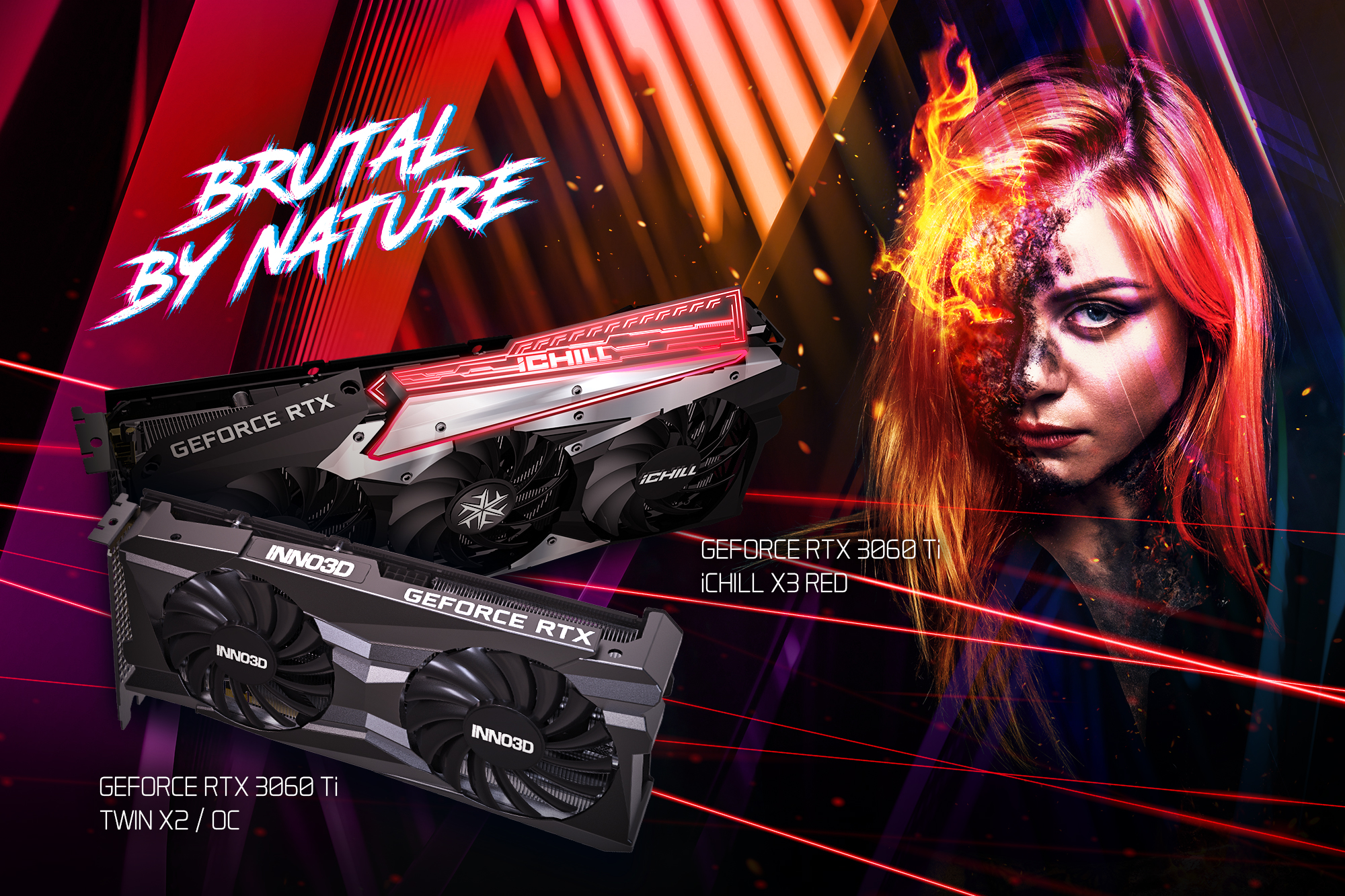 Hong Kong – December 1, 2020 – INNO3D, a leading manufacturer of pioneering high-end multimedia components and innovations is excited to announce the INNO3D NVIDIA® GeForce RTX™ 3060 Ti is the latest to join the 30 Series line-up with a couple of our best performing fans with the iCHILL X3 RED and TWIN X2 / OC.

Founded in 1998 with the vision of developing pioneering computer hardware products on a global scale. Fast forward to the present day, INNO3D is now well-established in the gaming community known for our innovative and daring approach to design and technology. We are Brutal by Nature in everything we do and are 201% committed to you for the best gaming experience in the world.

Powered by the NVIDIA Ampere architecture and the 2nd generation of NVIDIA RTX, the world’s most powerful PC gaming platform for real-time ray tracing and AI, the GeForce RTX 3060 Ti delivers blistering 1080p and 1440p gameplay starting at only $399 USD.

The RTX 3060 Ti also supports the trifecta of GeForce gaming innovations too, including performance-accelerating and IQ-enhancing NVIDIA DLSS technology which is now available in over 25 games; NVIDIA Reflex which reduces system latency (‘input lag’), making games more responsive, and giving players in competitive multiplayer titles an extra edge over the opposition; and NVIDIA Broadcast, a suite of audio and video AI enhancements including virtual backgrounds and noise removal that users can apply to chats, Skype calls and video meetings. So whether they’re playing traditional PC titles, powering through creator and productivity workflows, or marveling at the latest cutting-edge ray-traced titles like Cyberpunk 2077, Call of Duty: Black Ops Cold War, Watch Dogs: Legion, and more, the GeForce RTX 3060 Ti delivers the best possible experience in its class for everyone everywhere.

Product pages can be accessed here:

The GeForce RTX 3060 Ti has adopted the iCHILL X3 cooler that has been a success with its bigger brother GPUs GeForce RTX 3090, 3080 and 3070, but lights up. Its factory overclocking combined with NVIDIA features such has Ray Tracing Cores and Tensor Cores allows you play your favourite titles, beat your opponent while also showing off your amazing PC gaming rig. The triple 9cm fan design is asymmetrical, radical and daring while using scythe blades to maximise airflow and optimised to operate in low fan speed condition.  The iCHILL X3 RED comes with 6 copper heat pipes with heat pipe length of 1371mm and total surface area of 832207mm². The iCHILL X3 RED lights up red LED without RGB control as it does not require this - the red look gives your PC system a mean devilish theme. It also includes and tail fin module that can be inserted to the top of the card to add more LED effect to your set-up for the ultimate Instagram post. It comes with two tail fins, one with logo and one blank for customization.

No introduction is needed for our legendary TWIN X2 and TWIN X2 OC, but for newbie INNNO3D fans you’ll be glad to know the INNO3D GeForce RTX 3060 Ti TWIN X2/OC both boast dual 9cm scythe fan blades and with 4 copper heat pipes to keep them both cooling at optimal level, especially when the factory overclock for the OC version on this excellent performing card is powering your gaming experience. The graphics card is made with quality materials therefore is a solid block and sturdy piece of equipment. However, we understand gamers may want to display the INNO3D graphics card at different positions in their PC set-up so we have included the INNO3D back plate to reinforce the graphics card. This is to prevent it from unintentional bending adding protection to your gaming weapon.

We aim to provide our gamers with the same treatment has the bigger more powerful GPUs by equipping our GeForce RTX 3060 Ti with the same coolers that have proved so successful with previous RTX 30 series launches. So no matter which GPU you have purchased, INNO3D guarantees you our approach will always be the same which is to be Brutal by Nature.

Years of R&D has allowed INNO3D to make technological advancements, continously pushing the boundaries and bolster their expertise in the GPU industry. It has elevated INNO3D  to a point that makes a difference for high-end gamers and design creation professionals achieving high performance with outstanding temperature control and at super quiet noise levels.

© Copyright © All Rights Reserved by INNO3D.